I'm Back, well I hope I am!  I will attempt over the next few weeks to update the blog. I would say that the onset of Facebook / twitter, the ease of posting pictures, telling where your going , where you have been,  what you are doing and who with is a reason the blogging has slowed to a stop. It may be  Im just lazy.
This may just be an exercise in dealing with things, who knows, but I have a need to do so.
The kids are growing, I have the support of my wife who is much more than just that.... I digress.
So this may just be for me, I have found with blogging I have looked back with a smile on things that have happened.  I have a feeling this won't be one but it may have more importance for sure.
So about a year ago I found myself sat at work. I seem to remember bemoaning how busy I was, a few things contributed to this downward day.... I would rather still be on the holiday that we had just returned from, the weather was nice, why was I not fishing?
At this point my hands rested on the back of my head and I stretched, my fingers massaged the stiffness of middle age, then like a thunder cloud it was there .....a lump. I don't know why but at that moment I just knew somthing was wrong, not in the way things had been before. This feeling made me sick to the depths  of me.  Anyway doctors, hospital, tests, surgical procedures and then results. Well even though everyone said
"oh you will be ok"
It wasn't it was that word, the one you dread
"Cancer" yes the one everyone else gets. The one you try to tell yourself older people get, even though you know deep down your fooling yourself into a false feeling of safety.   Yet here sat before me was the guy who knows such matters telling me.
All my life I have thought about how would I cope with that kind of news. Well I have tried not to think of it to be honest but here it was, as cold as a winters day on the river, but in no way as welcome.
It was strange all I could do was think of the ones I loved, Melanie, the kids, my mum and dad,  how would I tell them?  When should I tell them?  Should I tell them?  It was a haze one thought arguing against another with all the time a nagging feeling in the back of my mind. It was one I had to deal with but was trying to maybe avoid I knew it would come.
Well I seem to think I rang work. I had left an hour earlier hoping for the best and being wished the best, hoping and wishing had not worked and as I told Ste the bad news. I felt more sorry for him than myself.
"That was hard"
I told myself, how would family and friends be? Well it was not good and from being told the news midweek it was Sunday before the phone stopped ringing and one of the kids or Melanie was not sat by my side. Then it was there I was here on my own with my thoughts and feelings .  How would I cope? It's strange though because the  first questions in my head was just like when I was told not about me it was about Melanie and the kids and that's how it's been a constant battle in my head. Some parts of the day I'm winning every now and again I'm on the ropes raking a beating!
Well the tv was on, it could have been five minutes, it could have been an hour I don't know. I do know though that when on my own the chances are it will be on a sports or the history/discovery chanel.  My head lifted or maybe I just focused and there it was. I have seen it a hundred times and while I have been aware of this and what it meant it had never hit home like now. The thing on the TV was D-day, hundreds of young men, nearly all younger than me at a guess, running up a beach, being shot by other young men who if they had come across in normal life, would have had little to fight over never mind kill.  I was lucky!  Look how lucky I am ....a good family Melanie and the kids my mum and dad good friends. My life as been blessed the more I thought about this the luckier I had been I was now going through time I'm luckier than those I kept telling myself  I felt guilty for being upset so many people would swap me places . I can remember my nan telling me stories of how her young brother had died and her dad coming home.......
"The tears of my father mixed in with the coal dust from the pit he had been called from, making my brothers face black."
She told me. Oh god how lucky  I am.
That's how I coped, it may not be ideal but that's it I was thankfull.
So treatment goes on, the breaks from the nag at the back of my mind come in the smile of my kids a shared laugh with Melanie. The moment Wigan score a try, or the waiting of the float disappearing on its way down the river.  That's about it for now, I will try to get some fishing related stuff up at some point until then  god bless!
Posted by Tony at 23:32

"... on a good day of fishing, the job, the noise and clutter ... fade away until there is only water and the rhythm of the rod and, now and then, a fish."

A simple philosophy I have adopted over the years has been tested and re-enforced in the past few weeks. It is to celebrate those good and pleasing things encountered in daily life, no matter how small, with at least the same vigour as I bemoan the bad or merely vexing.
-Steve Dobson 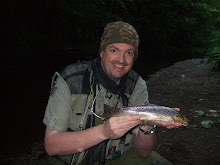 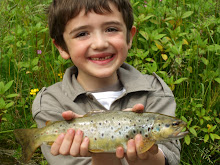 My lad and little pal 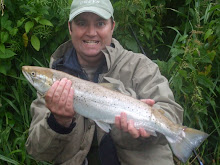 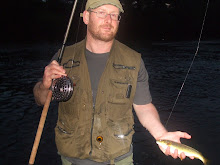 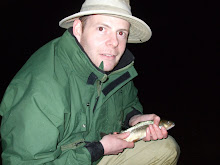 A pleasure to spend time with especially by the river 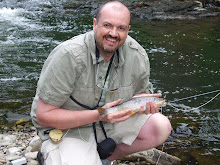 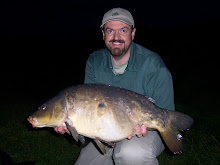